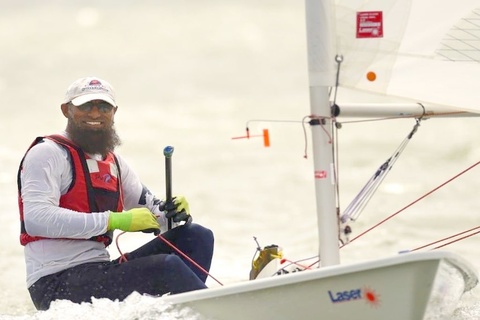 2nd CAS International Open Sailing Championship 2019      PAF yacht Club Korangi Creek, Karachi
Toiling against the gusty winds and 15-20 knots at the Arabian Sea Pakistan’s experienced international sailors dominates Laser Standard and Windsurfing RS:X Classes of boats at the end of first day of 2nd CAS International Sailing Championship at PAF Yacht Club Karachi.
On a tough day of the event, being held after 11 years, Tanveer from PAF got the benefit of the home conditions and led the pack of 17 competitors with three points in three races conducted on the opening day of the four-day affair.

“No doubt it was a tough day but I exploited the home conditions,” Tanveer said.

“I led the first race quite confidently, was behind in the second but recovered and so did well in the third,” Tanveer further added.

Tanveer represented Pakistan in the 2002 Busan Asian Games. Muhammad Tanveer of Pakistan in Laser Class is on top of the point table followed by Mr Asri Asman from Malaysia and Muzammil Hassan from Pakistan at second and third positions respectively.
International Qasim Abbas of Pakistan had also a superb start when he finished at the top of the RS:X class with four points. He was followed by Pakistan’s Mohammad Sajjad with seven points and Mami Safouan with ten points in three-race stint.
In the Laser Radial Women Class Khairunneeta Mohd Afendy from Malaysia holds the top position. Marium Ihab Mohamed from Egypt and Marium Asad Ali of Pakistan are at second and third positions respectively.
In the Optimist Class (U-15) Master Panna Boonnak from Thailand is on top of the point table followed by Ummu Nurdania Rozaini from Malaysia and Miss Thorfun Boonnak from Thailand occupy second and third positions respectively.
Three races are planned today(Thursday)on second day of the Championship.
Meanwhile, vice-chairman of the organising committee Abdur Rehman Arshad told this correspondent that in the event sailors from 13 nations are showcasing their talent.
As many as 77 sailors, 41 foreign and 36 from Pakistan, are fighting for titles in four different classes.
The nations featuring in the event are Thailand, Malaysia, Turkey, Indonesia, Chinese Taipei, Hong Kong, Sri Lanka, China, Australia, Tunisia, Egypt, Bahrain and hosts Pakistan.