Iran Kabaddi team has reached Lahore to participate in the 40th edition of National Kabaddi Championship to be held in National Training and Coaching Centre, Lahore. 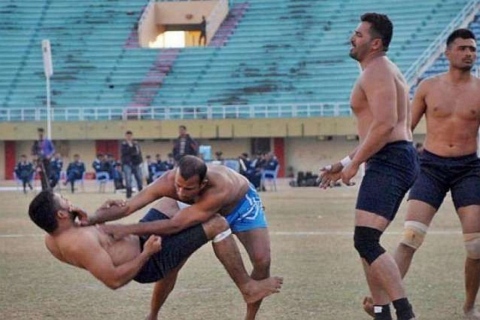 Iranian Kabaddi team will be the center of attraction as it has arrived in Lahore to participate in the 40th National Kabaddi championship. 5 day event will start from Wednesday 28th February to Sunday 4th March 2018. Pakistan Kabaddi Federation is organizing the event to promote the game in the country.


13 regional and departmental sides along with the guests Iran will participate in the event. All the participating teams would display their skills and techniques during the 5 day event. Spokesman Pakistan Kabaddi Federation has said that the participation of Iranian team will not only boost the soft image of Pakistan but also our players will get the exposure after playing against international side. He added that, the arrival of Iranian team would also help improving the friendly and sports ties between the two neighboring countries.


Iranian team during its seven day stay in Lahore will play five matches.
He further said that our coaches will also discover new talent which will further help in team building process and create a healthy competition between the players. "Exciting and high quality kabaddi will be witnessed during the competition and we expect big audience to witness the matches," he concluded.


Following are the teams participating in the event: