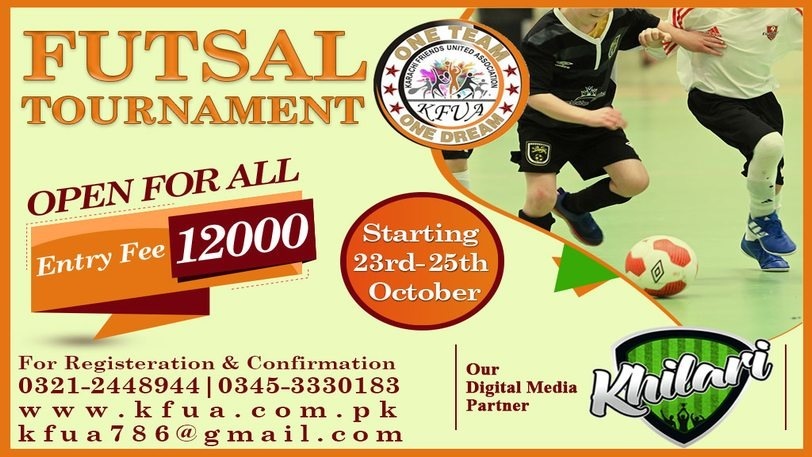 Karachi Friends United Association is set to kick the KFUA Futsal Tournament 2020 which will spin its magic from 23th till 25th October at Sport timeout Futsal Court Gizri DHA, Karachi.

Futsal players from the Academy, Club or any company team can participate in this tournament.

Draws for the tournament will be finalized upon confirmation by the participating teams. The teams will be divided into two or four pools or single league.

The tournament carries a winning prize money of 15,000 rupees while the runner ups will be pocketing 5,000 rupees. Other than the cash prizes, trophies await the top three position holders.

To encourage participation, KFUA has announced that more than one team from an organization, Academy, Club and Company may participate in the tournament.

Each team will be consisted of 8 players and one coach to whom printed 9 T-shirts will be provided after the confirmation from KFUA.

The registration fee has been set at 12000 rupees.

The Karachi Friend United Association believes that Sports develops a sense of friendliness and team spirit among the players / children’s / employees, which helps a person to polish his/her overall personality. KFUA since being established, our promise has been to deliver quality Sport coaching and management.