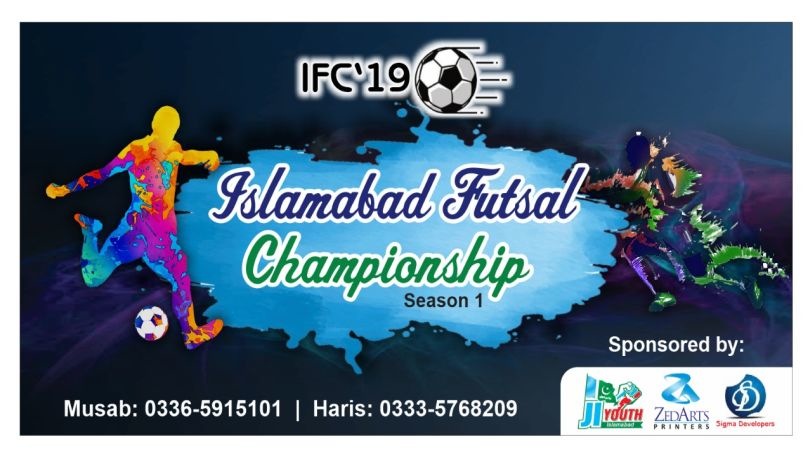 The very first edition of Islamabad Futsal Championship (IFC), a manifesto for all the players to show their capabilities is all set to spin its magic from 19 to 20 October in the federal capital of the country.

Mr Haris Khan, Mr Sohaib Nawaz and Mr Bilal Atif will be hosting this mega Fustal action which is to be organized for the futsal lovers of the twin cities: Rawalpindi and Islamabad where the players would be provided with a chance to showcase their skills while competing against each other in the upcoming matches.

This seven a side tournament with three rolling subs will follow Standard Futsal Rules and the matches would kick off from 05:00 PM sharp. Each match will be played under strict supervision of management and the referee, whose decision will be considered final on the field.
Altogether, this event is offering an attractive prize pursue of Rupees 30,000 among which the winning side will catch 20,000 PKR while the Runner up team will be awarded with 10,000 Rupees along with glittering trophies. There are chances of the mentioned winning prizes to increase depending on the number of participating teams.
As many as 32 slots are made available for the clubs who wish to field their teams in this mega futsal bonanza whose deadline for entries is today so hurry up and catch this opportunity as soon as possible!
Those clubs that wish to field their teams in this mega futsal bonanza are to pay an entry fee of Rupees 3000 along with CNIC copies of the team members for which these given cell phone numbers can be contacted: 0332-5785752 , 0307-5671430 and 0349-8218937.
HD Photography will be made available for the matches as well.