Pakistan now looks to seal a 2-0 series victory against Sri Lanka in the last ODI match to be played into Pakistan-Sri Lanka Cricket Series 2019 (ODIs) which is being held at National Stadium in Karachi. 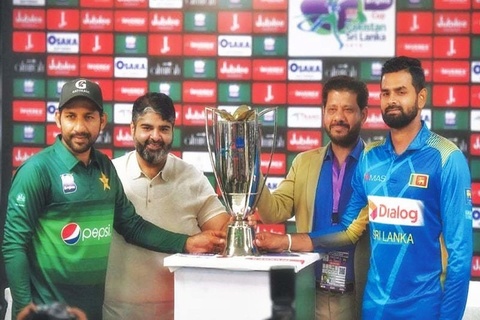 Pakistan-Sri Lanka Cricket Series (2019)      Gaddafi Stadium
Babar Azam’s truly classic innings (115 off 105 balls) and Usman Khan Shinwari’s fiery bowling (rich haul of 5-51 in 10 overs) were the standout performances in leading Pakistan to a comfortable 67-run triumph in Monday’s rescheduled second fixture of the ODI rubber after the opening encounter was washed out last Friday, Sri Lanka also had their moments under the night sky with Shehan Jayasuriya towering for them as a decent all-rounder.

Dasun Shanaka — the captain-in-waiting for the subsequent three-game Twenty20 International series which will be played in Lahore from Saturday onwards — together with the left-handed Jayasuriya became part of the cricketing history by sharing the highest sixth-wicket partnership in all One-day Internationals for Sri Lanka as the duo added 177 to eclipse previous best stand of 159 built by Silva and Kapugedera — who both have Chamara as their first name — against the West Indies at Port of Spain in April 2008.
Their heroics were remarkable in every sense because had the top Sri Lankan stars come on this trip, they might have found it utterly difficult to get the opportunity to make a name for themselves or let alone get picked in the — ODI — squad. But now both Jayasuriya, who like Kapugedera of 11 years ago became a victim of the nervous 90s when he edged an Usman Shinwari delivery on 96 behind the stumps to the Pakistan captain, and Shanaka have the platform to warrant selection in the next couple of series, at least.
The real positives in the opening encounter in now what is tragically reduced to a two-game rubber were Jayasuriya — who also was quite impressive with his assortment of off-spinners as his final analysis of 0-48 after starting the first ODI here in Karachi following a long-drawn-out 3904 days isolation of this format with the solitary maiden over of the Pakistan innings — Shanaka and promising leg-spinning all-rounder Wanindu Hasaranga.
But Rumesh Ratnayake, the interim head coach, and the stand-in Sri Lankan captain Lahiru Thirimanne would opt for a reshuffling in the batting ranks after the top-order was blown away by Usman’s triple strikes upfront as the tourists slipped to 28-5 in 10.1 overs after Danushka Gunathilaka and Sadeera Samarawickrama adopted a safety-first approach at the beginning of the daunting chase before Samarawickrama misjudged a length Usman delivery.
Thirimanne’s decision to demote himself from the customary opening spot to No 5 and letting the unrelated Fernandos — the classy Avishka and Oshada — occupy the pivotal top-order positions badly backfired. An option would open doors for the uncapped but highly-rated Minod Bhanuka to launch his international career by replacing Samarawickrama behind the stumps and allowing Thirimanne to go in first because the 24-year-old is classified as a wicket-keeper who bats left-handed.
The bowling may force Sri Lanka to seriously consider playing the unorthodox slow left-armer Lakshan Sandakan in place of one of the seamers after noticing how slow the pitch was for Monday’s fixture.
Pakistan, on other hand, might be tempted to break the left-arm triumvirate of pace battery — with Mohammad Amir and Wahab Riaz being the other two — and mull the still yet-to-be proven credentials of Mohammad Hasnain, who was time and again talked of as the team’s surprise World Cup weapon but one who was mystifyingly kept confined to the bench throughout the mega event staged this year summer in England and Wales. The 19-year-old right-armer from Hyderabad was asked to cut short his Caribbean Premier League stint to make himself available for this series.
Head coach Misbah-ul-Haq have already struck the right note by starting his unique role — of being both head coach and chief selector — but those who know him deeply would be in for expected frustration if Hasnain fails to win only his sixth ODI cap, at a venue where last March he caused havoc in the Peshawar Zalmi batting lineup with a lightening spell to allow Quetta Gladiators become Pakistan Super League champions for the first time.
But a worrying sign for Misbah was Shadab Khan’s persistent struggles as the young leg-spinner was taken to the cleaners by Jayasuriya and company, clearly illustrated by figures of 2-76 in 9.5 overs with 48 runs conceded in the shape of boundaries (four sixes and six fours).